Designing the Future for Global Cities and Lifestyles

Mori Art Museum and Academyhills operated by Mori Building Co., Ltd., and Institute for Urban Strategies -The Mori Memorial Foundation are joining hands with co-organizer The Japan Foundation Asia Center to stage the next segment in the international conference series on cities and lifestyles of the future -- "Innovative City Forum 2019 (ICF)" -- on November 19 - 20, 2019 at Roppongi Hills.

Held every year since 2013, ICF is an international conference for "designing the future for global cities and lifestyles". Global opinion leaders including scholars, researchers, engineers, artists, designers, enterprise managers, and journalists come from diverse fields of endeavor, both from within Japan and abroad, to discuss lifestyles of the future in the context of technological innovation, and the future of the cities that underscore those lifestyles. To date, there have been 289 speakers, and 60 persons are scheduled to take the podium this year.

In its 7th edition this year, "the 4th industrial revolution and what lies beyond that" will be discussed beyond generations. For the keynote presentation, it welcomes Jorgen Randers, Professor Emeritus of the BI Norwegian Business School and authority on sustainable development in its relation to the future and climate change; Keisuke Toyoda, formerly of Tadao Ando Architect & Associates and now an international consultant of architecture, urban development and technology; and Fumio Nanjo, Director of Mori Art Museum.

The United Nations has raised "sustainable cities and communities" as a goal in its SDGs, while modern cities are facing aging populations, deteriorating environments, increasing difficulties in ensuring food and energy supplies, and a plethora of other issues. Meanwhile, the rapid pace of technological innovation offers hope that these problems will be solved in time, and lifestyles are likely to change in the process as well. The situation calls for a new vision of the future that pools the latest ideas from multilateral viewpoints that speak to society, lifestyle choices, culture and more. ICF provides a platform for advocating directions to a better future and discussing the fundamental question of humankind's purpose for living, from diverse angles. 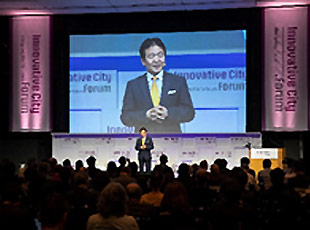 Mori Building has involved in joint research and various verification in cooperation with leading research institutes, universities and companies. Using Roppongi Hills and other "Hills" as a platform for testing and transmitting, it will continue discussing on how cities and lifestyles of the future should be, and, by practicing urban development in ways that spawn innovation, it seeks to enhance Tokyo's magnetism as a global city.