This year's survey, which looks at the 2021 calendar year and beyond, has revealed that while the average annual supply of large-scale office buildings in Tokyo's core 23 cities will be somewhat favorable in 2023 and 2025, over the next five years combined it will be lower than the historical average. As the floor space of office buildings become larger and more concentrated in central Tokyo, average supply per property is expected to increase, with properties that offer gross office floor space of 100,000 m² or more accounting for about 70% of total supply, indicating that building scale will trend upward. 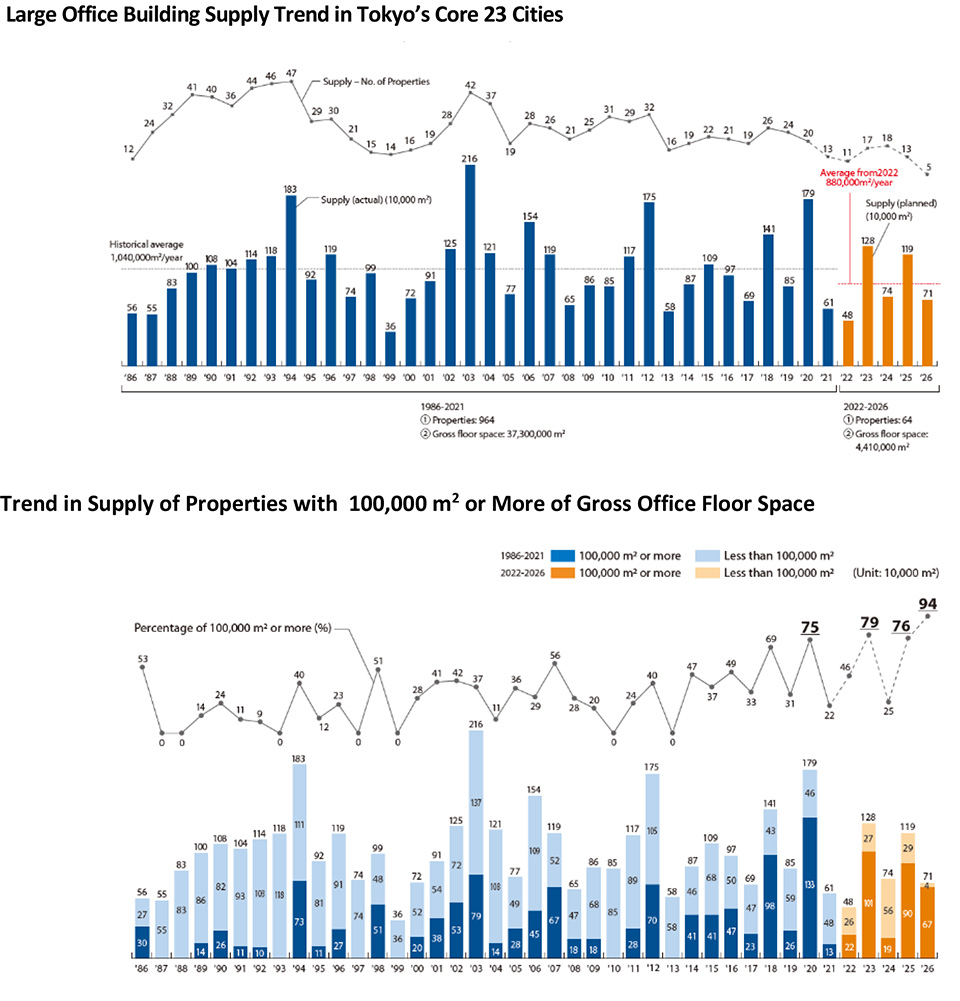 Tokyo's three most centrally located cities are expected to account for 75% of annual supply over the next five years, exceeding the 71% average of the past decade, suggesting the further concentration of offices in central Tokyo, particularly in major business areas, especially the Toranomon, Nihonbashi/Yaesu/Kyobashi, Shinagawa, and Akasaka/Roppongi areas. The trend is being fueled in part by the National Strategic Special Zone System and other legal revisions aimed at further enhancing central Tokyo with large, multifunctional redevelopments.

The vacancy rate overall was 5.6% at the end of 2021, up 1.6 points from the previous year. Under the tight supply-demand environment prior to the COVID-19 pandemic, vacancy rates by area did not vary significantly. But thereafter, as vacancy rates began to rise, the rate in central Tokyo's major business areas rose to 5.2% but held at 4.5% for properties in the same areas with gross office floor areas of 100,000 m² or more, showing that location and property grades are influencing vacancy rates. Also, newly built properties absorbed 520,000 m², or nearly 90%, of total office supply (610,000 m²), whereas existing properties were subject to cancellations as tenants relocating to newly built properties, etc., created vacancies that required time to be reoccupied. Consequently, the absorption rate has turned negative, most notably in locations outside of major business areas. 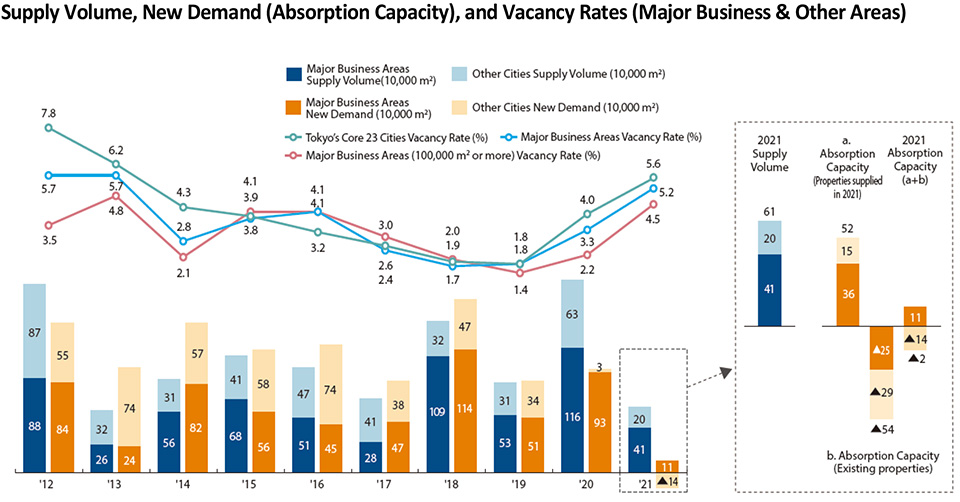 According to a survey of office needs in Tokyo's core 23 cities conducted last October, employees who are returning to or continuing to work in offices are primarily interested in workplaces that have been made more attractive through improvements/renovations and offer less burdensome and more agreeable commutes. With the spreading adoption of remote work following the COVID-19 pandemic, companies are converting their offices from mere workspaces into innovative environments for communication, human resource training, and cultivating corporate culture as well as places to which employees are willing commute. In light of the impact such trends have on vacancy rates by area and property grade, corporate demand is expected to gravitate increasingly toward extra-appealing properties that contribute to new workstyles from both hard and soft perspectives.