Tokyo, January 21, 2020 -- Mori Building Co., Ltd, the leading urban landscape developer, announced today it has completed construction of the "Toranomon Hills Business Tower," part of the Toranomon 1-chome Type 1 City Redevelopment Project. This expansion of the Toranomon Hills complex will facilitate its evolution into a new international hub and global business center where global players will live, work and gather. The new building is scheduled to open in April.

Toranomon Hills Business Tower is a 36-story tower complex offering some 96,000m² of large-scale office space as well as around 7,600m² of retail space for shops and restaurants. The Tower is directly connected to the new Toranomon Hills station on the Hibiya subway line, which will commence partial service from June 6 this year; it is also connected to the existing Ginza subway line Toranomon station via an underground pedestrian walkway. A bus terminal will be located on the first floor for various bus lines, including the Bus Rapid Transit service which will connect the city center, and waterfront areas and airport limousine buses connecting the Toranomon area directly to Haneda airport. In addition, when Loop Road No. 2 is fully opened, it will enhance accessibility to Hanedea Airport. Toranomon Hills will serve as a new "Gateway of Tokyo" which will connect central Tokyo with the world.
A sizeable incubation center called "ARCH" with an area of around 3,800m² will host innovators in various fields, allowing them to collaborate on new business ventures by large-scale enterprises. ARCH aims to be a base for Japan's unique innovation ecosystem.
Mori Building is currently constructing Toranomon Hills Residential Tower, which is planned to be completed in January 2021, and (tentative name) Toranomon Hills Station Tower, which has been co-developed with the new Toranomon Hills station on the Hibiya subway line and completion of which is planned for July 2023. Mori Building aims to continue enhancing the magnetism of Tokyo as an international city through its creation of this new international hub and global business center in the Toranomon area.

Offices on 32 floors--from the 5th floor to the 36th floor--will provide a total working space of some 96,000m². The standard rentable floor space is about 3,000m² and features expansive pillarless layouts. The use of a full-height windows from floor to ceiling provides bright open spaces, enabling flexible office layouts that can accommodate a variety of working styles. Refreshment corners are provided in the common area on each floor aimed at promoting communication, and special areas are provided on each floor for the storage of supplies for use in the case of any emergencies or natural disasters.
The Tower is directly connected to the new Toranomon Hills station on the Hibiya subway line and the existing Ginza subway line Toranomon station via an underground pedestrian walkway. A bus terminal will be also located on the first floor, which will serve as the departure and arrival point for airport limousine buses and the bus rapid transit services connecting the city center and the Tokyo bay area. In addition, when Loop Road No. 2 running under Toranomon Hills is fully opened, it will be possible to reach Haneda Airport by road in 25 minutes, including by buses departing from the bus terminal. These factors will provide the convenience and transportation access that are indispensable for companies looking to expand their business globally, thus contributing to the business development of tenants.
Almost all of the available space has already been leased to Japanese and overseas companies in variety of industries. With the launch of the Toranomon Hills Business Tower, the total office area of the Toranomon Hills development will expand to approximately 195,000m². 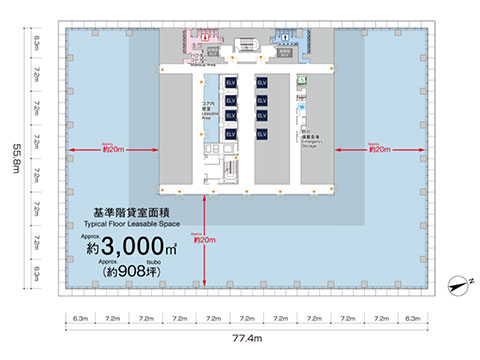 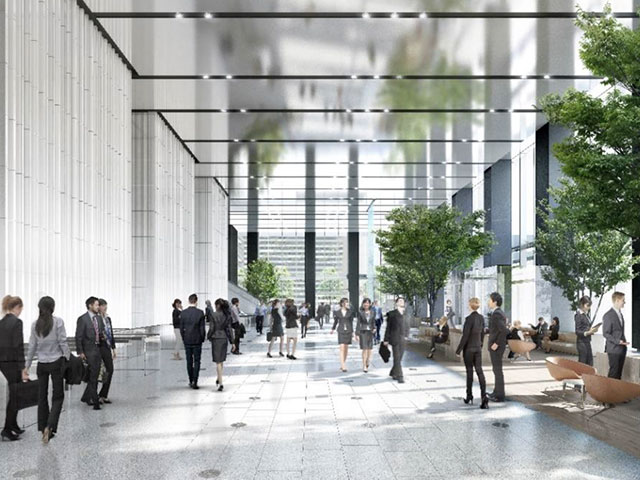 The 3,800 m² "ARCH" incubation center will be located on the fourth floor. ARCH is a new business creation base in the Toranomon Hills area and is one of the important components of its ambition to become a "Global Business Center".
Its facilities include meeting rooms, co-working space, a training room, cafe and lounge. The US-based venture capital firm WiL, which supports large enterprises' new business creation as well as investing in and nourishing new venture companies, participated in the planning and operation of the facility. It offers a range of support services including various sector know-how, educational programs and enlightenment events. In addition, specialists in new business support with a track record of creating new business opportunities within larger enterprises will be stationed exclusively at the facility; they will encourage collaboration between participating companies with the aim of supporting their new business development.
This incubation center will aim to become a base for Japan's unique innovation ecosystem by leveraging the abundant resources of established larger enterprises, such as their human resources, goods, capital and know-how, and supporting large enterprises' internal business reforms and new business creation.
By linking with various networks in Japan and overseas, ARCH will become a bridge between the various players in a number of industrial sectors, and will help innovations originating in Tokyo to permeate throughout Japan and overseas. 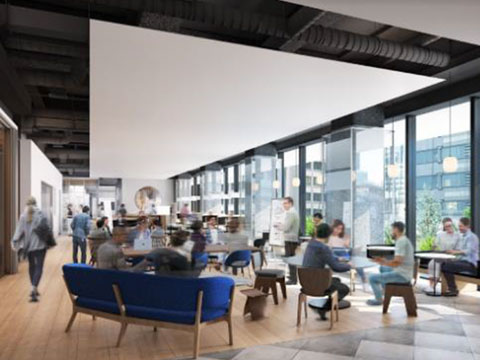 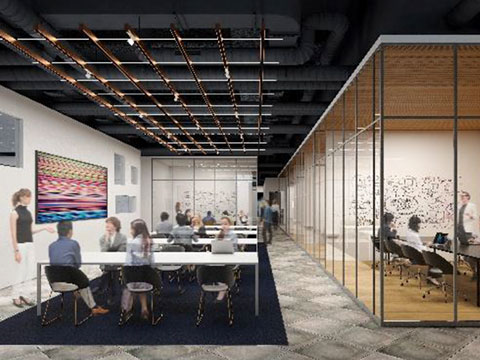 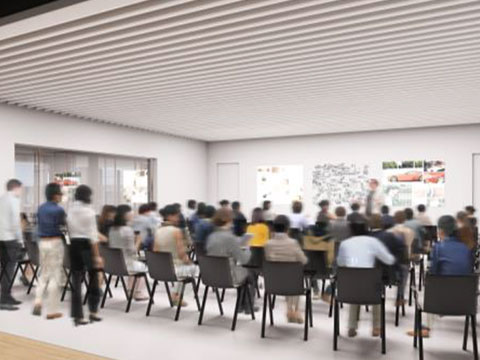 From the first basement floor to the third floor, a total of 58 new stores occupying a total area of approximately 7,600 square meters will offer food and drink and other products and services aimed at supporting global players' lifestyles. On the first basement floor, there will be high-quality supermarkets and restaurants for daily use; the first floor will feature stores offering uniquely Japanese sweets, candies and wines suitable as unique souvenirs of Toranomon Hills. The second floor will host retailers of everything from everyday fashion items to miscellaneous goods. In addition to a wide range of restaurants offering lunch and dinner, the third floor will house Toranomon Yokocho, a landmark dining facility featuring offerings from famous stores from all over Tokyo.

On the first floor, a bus terminal of about 1,000 square meters will be connected to Toranomon Hills station on the Hibiya subway line and Toranomon station on the Ginza subway line. This bus terminal will serve as the departure and arrival point for airport limousine buses and the bus rapid transit services connecting the city center and the Tokyo bay area. On the second floor, a new pedestrian walkway connecting the business tower and Toranomon Hills Mori Tower has also been constructed. Together with the Shintora-dori Avenue constructed as a stretch of Loop Road No.2, this completes a new pedestrian network that will connect the entire Toranomon Hills area. In addition, When Loop Road No. 2 is fully opened, it will offer easy access to Interenational Hanedea Airport. Toranomon Hills will serve as a new "Gateway of Tokyo" which will connect central Tokyo with the world. 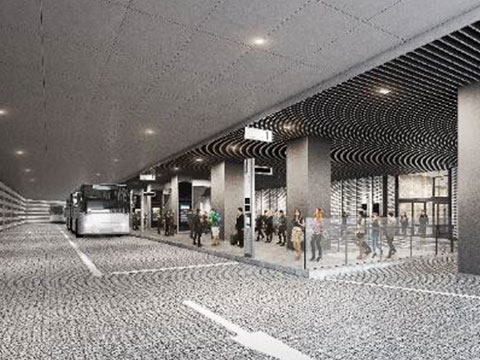 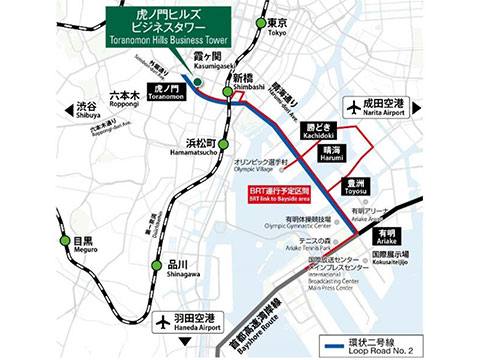 Creation of a new energy network

A plant that supplies electricity and heat to the area is located on the third basement floor. In order to facilitate the efficient use of energy and strengthen disaster prevention measures, the plant includes a private power generator complex incorporating a gas cogeneration system and a highly efficient heat generation system that utilizes large-scale water tanks and waste heat utilization facilities, creating an energy supply that is environmentally friendly. A back-up system that can supply electricity and heat in the aftermath of a disaster has also been installed, contributing to the safety and security of this global business center. 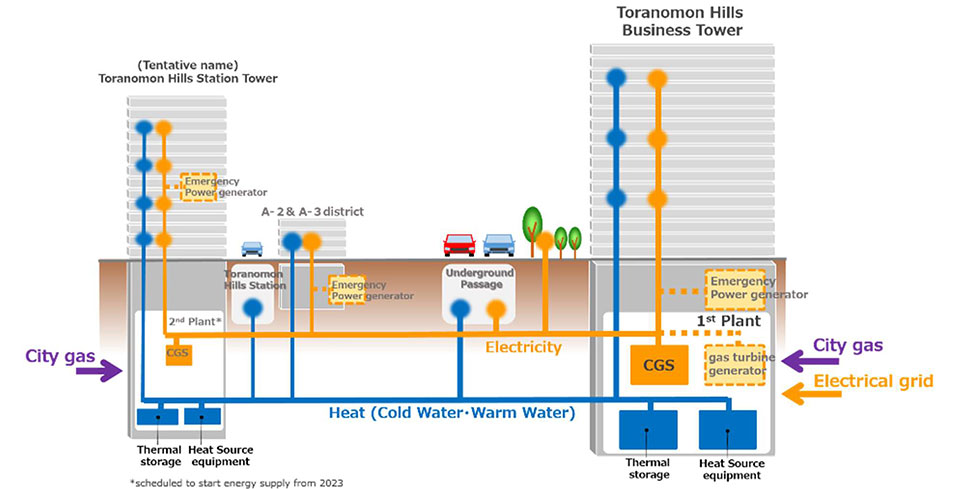 Exterior architectural design was created by German architect Christoph Ingenhoven (Ingenhoven architects); the new building has been designed to harmonize with the existing Toranomon Hills Mori Tower and act as an international business hub. Interior design of retail facilities and "ARCH" was created by Masamichi Katayama (Principal of Wonderwall); it incorporates modern elements while reflecting the history and traditions of the surrounding Toranomon area.

Public art that colors the city

Public art works by three flourishing Asian contemporary artists with global reputations are displayed at office entrances and other places. 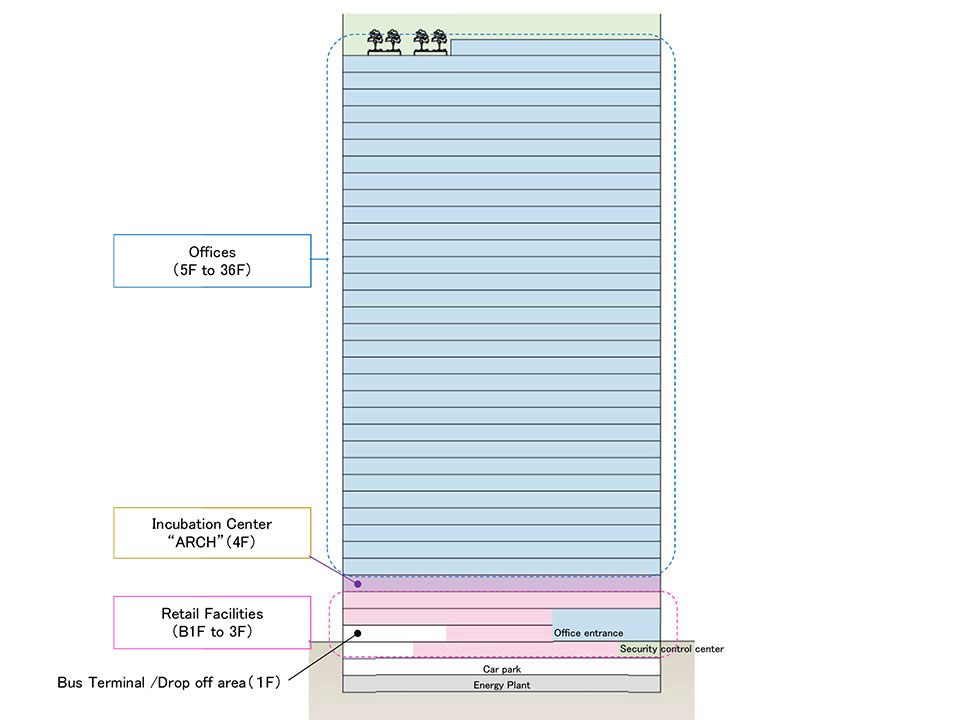