Tokyo, October 9, 2019 -- Mori Building Co., Ltd, a leading urban landscape developer, announced today that it has established Mori Building Urban Lab in Roppongi, Minato-ku, Tokyo, which will serve as a research facility to overlook Tokyo from a multifaceted perspective and to consider the future of cities and Tokyo.

Mori Building, since its founding in 1959, has been constantly thinking about Tokyo's future under its mission: "create cities, nurture cities". For more than 20 years, Mori Building has been developing proprietary technology to create models of Tokyo and compare them to same-scale models of New York and Shanghai, also created by Mori Building. Through such comparisons, Mori Building has deepened its discussions with experts in various fields regarding the future of Tokyo as a major international city. In view of the increasing competition among major international cities to attract global resources and knowledge, the Mori Building Urban Lab will support the process of considering key issues, such as how Tokyo should evolve, what kind of urban lifestyles cities should offer and what should be done to improve Tokyo's international competitiveness.

The facility measures approximately 1,670 square meters in total. The Theater Room, an impressively spacious area of about 740 square meters, has a large model of Tokyo (length 15 m x width 24 m; 200 square meters) and a huge 360-degree screen on the wall surrounding the city model. In addition, with some 30 high-definition projectors scattered throughout the room and various projection mappings created with state-of-the-art video technology, Mori Building Urban Lab offers various tools for conceptualizing, considering and discussing the future of the international city of Tokyo from diverse perspectives. Going forward, Mori Building will continue to contribute to Tokyo's magnetic power by creating and nurturing cities. 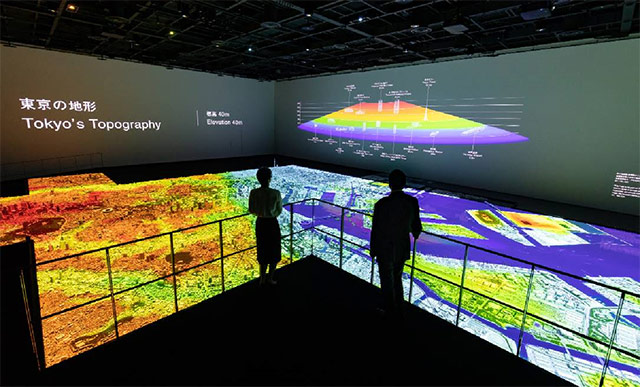