Tokyo, April 13, 2016 - Mori Building, a leading urban landscape developer, today announced an extensive slate of large-scale redevelopment projects involving the construction of three towers around the existing Toranomon Hills . The plans will transform the area into a more vibrant, globally accessible business hub that will entice individuals and enterprises from around the world to live, work and play in Toranomon. 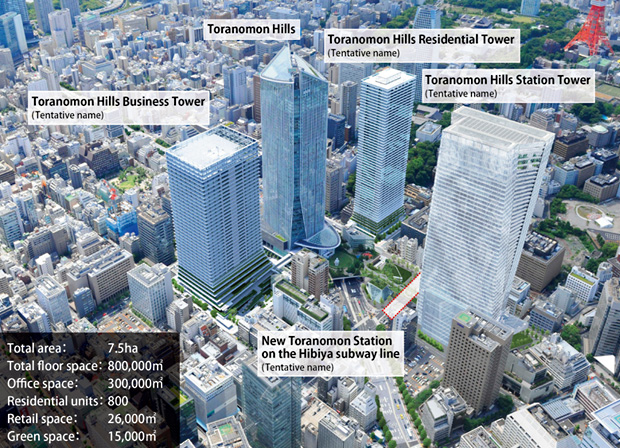 Upon completion, the total area of the Toranomon Hills complex will reach about 7.5 ha, including the four Toranomon Hills towers, new transport stations, roads and green space. There will be about 800,000m2 of total floor space, approximately equivalent to that of Roppongi Hills, including about 300,000m2 of office space and 26,000m2 of retail space. The site will also house a new subway station on the Hibiya Line and a new Bus Rapid Transit (BRT) station that will connect central Tokyo and the bay area.

Mori's redevelopment projects in Toranomon have already brought tangible results to the area, an impact which is expected to accelerate with these new projects. Since the inauguration of existing Toranomon Hills, land prices have jumped by about 34.4 percent and the number of people using Toranomon Station has increased by 7 percent. At Toranomon Hills complex alone, the large-scale office space to be created in this development is expected to triple the number of people working in the complex to 30,000. Meanwhile, projects by Mori and other developers in the larger Toranomon area are forecast to add more new office space over the next 10 years than was added over the last 30 years.

The number of residents in the area is also expected to increase as Toranomon Residential Tower adds about 600 residential units. The project also includes the cultivation of extensive green spaces, more than doubling the current area of 6,000m2 to 15,000m2. This will form a network of greenery that connects Toranomon Hills to the adjacent Mt. Atago slope and the Atago Green Hills complex, creating a refreshing and an eco-friendly nature island.

"The city and its people need to constantly evolve in order to bolster the city's power to attract creative individuals and enterprises from around the world", said Shingo Tsuji, CEO of Mori Building. "We believe that Toranomon Hills complex will continue to catalyze economic, cultural and environmental changes, establishing the area as a hub for international business that will enliven and strengthen Tokyo as a whole."

Mori envisions this project as multiple structures forming a conceptually harmonious complex that is smoothly integrated with all transportation options, reshaping Toranomon into a gateway to Tokyo and hub for international business.

"We believe that people have the power to change the city. Based on our unique urban design concept of Vertical Garden Cities, which makes intelligent use of ultra-high-rise structures and underground space to enhance infrastructure efficiency and integrate diverse urban functions, we seek to reshape Toranomon Hills into not only a place for business but also as a community that connects and nurtures diverse people gathered here," said Shingo Tsuji.

The tower will house the new BRT station connecting central Tokyo, the bay area and various venues for Tokyo 2020 Olympic and Paralympic Games, as well as a new Airport Limousine bus terminal that will connect Toranomon to Tokyo's international airports. BRT will be able to carry some 3,000 people per hour and is expected to serve as an important mode of transportation during the Games, carrying international athletes and audiences alike.

Toranomon Hills Residential Tower will supply 600 premium residential units by 2019, bringing the total number in the Toranomon Hills complex to about 800. Responding to the needs of long-term foreign visitors, the 56-floor tower will offer large-scale residential units and serviced apartments with Western-style en-suite bathrooms, a spa and fitness center, childcare facilities and a 24-hour bilingual concierge on site. The interior will be designed by Tony Chi, the NY-based designer responsible for the Grand Hyatt Tokyo and Andaz Tokyo. Christoph Ingenhoven will design the exterior of this tower as well to ensure a harmonious balance with the adjacent Toranomon Hills Business Tower and the existing Toranomon Hills.

Toranomon Hills Station Tower will be a unique redevelopment collaboration combining a multi-use high-rise constructed by Mori with a new subway station created by Urban Renaissance Agency. The tower will incorporate the new Hibiya Line subway station scheduled to begin partial service in 2020 and an elevated open deck with greenery connecting the tower to the rest of the complex via existing Toranomon Hills. Mori Building's signature style of integrated development will provide a soothing greenery-filled environment that also facilitates the movement of visitors, workers, and residents around the complex and through the city. The project will be designed by OMA principal Shohei Shigematsu in collaboration with founding principal Rem Koolhaas. The specs for Toranomon Hills Station Tower are still being finalized, but it is scheduled to open in 2022.

For ground transport, Toranomon Hills will continue to provide smooth access to Loop Road No. 2, a key trunk route that will stretch from Shimbashi to Toyosu when the final section is completed towards 2020, connecting the facility directly to Tokyo's fast-developing bay area.

Moving forward, Mori Building will undertake a total of ten large-scale redevelopment projects in Toranomon and surrounding areas, with these three towers at the nexus.