"D-Cube City" is a large-scale redevelopment complex located in Seoul, Korea. Mori Urban Planning Corporation (Minato-ku, Tokyo, president: Kazuhiko Yamamoto), an urban development consulting company in the Mori Building Group, participated in the project planning for "D-Cube City" as a general consultant. The commercial facilities in "D-Cube City" opened on August 26, with the Grand Opening event to be held on September 23. Over a period of five years beginning from 2006, Mori Urban Planning Corporation provided total support for this project in areas ranging from planning and design to leasing and operation/management planning. This represents the opening of the first large-scale project for the overseas urban development consulting business of this company. The company expects to receive contracts for consulting related to the operation of this urban complex after it is opened. 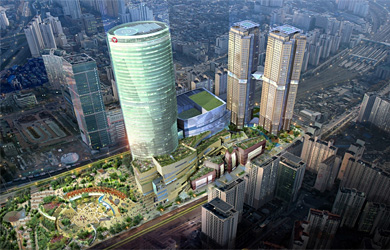 Key points of this project
・This project is a compact multi-purpose city centered on a 43-story complex (containing offices, a hotel, and shops). It also contains residence towers (2 towers, 51 stories) and a performance hall.
・The Jerde Partners (responsible for the exterior design of Roppongi Hills) were appointed for the architectural design, creating a landmark presence in the southwest area of Seoul.
・With a collection of the popular SPA (fast fashion) brands, this will be a new hot spot for young persons in Seoul.
・It will also be a center for tourism where visitors from overseas can at one stop enjoy a broad range of Korean fashion, merchandise, and cuisine.

Expanding the Mori Building urban development consulting business in Asia
Demonstrating the abilities to plan large-scale complexes and conduct Town Management
The Mori Building Group has been highly rated overseas for its urban development concepts and expertise, as seen in Roppongi Hills, and for its overseas projects such as the Shanghai World Financial Center. In Korea as well, the Group has already received contracts for multiple consulting projects in major cities including Seoul, Daegu, and Pusan. With its continuing remarkable growth, Asia is expected to see a rapid increase in demand not only for the construction side of urban planning, but also for the service side – the operation and management of completed urban facilities. Under these conditions, and based on our company's urban development concept of "Vertical Garden City," Mori Building intends to actively expand its consulting business and contribute to further growth in Asia by utilizing its total urban development expertise that spans everything from planning and design to operation and management.

Excerpt from an interview with President Cha Do Yun of Daesung Industrial Co., Ltd.
D-Cube City started out as an ordinary plan to construct three completely identical towers, much like in other projects. However the plan was completely redesigned from the ground up when the experts in complex development at Mori Building joined the project. As a result, I am confident that D-Cube City will become the Korean Roppongi Hills, a landmark for the southwest area of Seoul. In this project, our objective was not simply to achieve development profit, but was also to produce a dramatic improvement in the living environment for people in the area by completing a large-scale complex development project.