Tokyo, September 2, 2019 - MORI Building announced today that it has begun to supply electricity from renewable sources to tenants in the Roppongi Hills Mori Tower in Tokyo through the utilization of Japan's non-fossil fuel energy value trading market; the first initiative in Japan by an office leasing company to supply electricity from renewable sources to its tenants. This was made possible by the fact that Roppongi Hills has its own energy plant and a registered electricity retailer, Roppongi Energy Service Co., Ltd., that operates the plant.

* a non-fossil fuel energy certificate with tracking information such as the generating source (e.g., solar power, wind power, hydropower, biomass power, geothermal power) and the location of the power plant.

In its efforts to provide 100 percent renewable energy, Roppongi Energy Service Co., Ltd. procures non-fossil energy certificates from the non-fossil fuel energy value trading market in response to requests from tenants in the building, and provides certificates to the tenants through Mori Building. Non-fossil fuel energy certificates can only be purchased by registered electricity retailers. This was made possible by the fact that Roppongi Hills has its own energy plant and a registered electricity retailer, Roppongi Energy Service Co., Ltd., that operates the plant.

Goldman Sachs, a participant in the RE100 initiative, is the first tenant of Roppongi Hills to use this renewable energy, with supply commencing in August 2019. Kazuhisa Tamai, Head of Corporate Services and Real Estate at Goldman Sachs Japan said, "Goldman Sachs is committed to procuring 100% renewable electricity to meet our global needs by 2020, aiming to minimize the environmental impact of our operations. We welcome Mori Building's efforts, and hope that they will pave the way for more companies to reduce their carbon footprint and contribute to the spread of renewable energy more broadly."

Mori Building's office in Roppongi Hills has also started using renewable energy. The company plans to promote the same initiatives throughout its Toranomon Hills area. Going forward, based on its philosophy of "create cities, nurture cities", Mori Building will continue to promote the "harmonious coexistence of cities and nature" and the "promotion of low-carbon cities", contributing to the realization of a sustainable society that leads to the future. 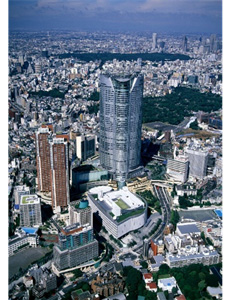